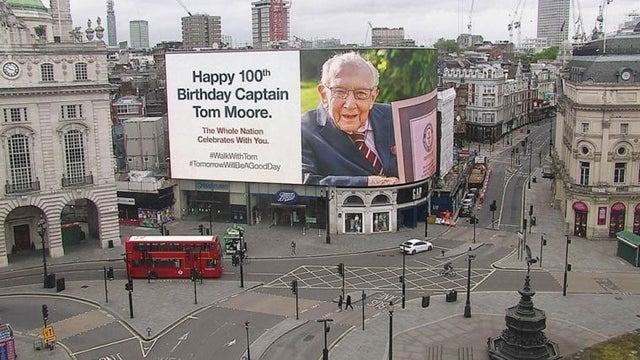 The last few weeks have been quite a whirlwind and completely wonderful for me to be involved in.

A couple of weeks ago I was asked if I would be available to photograph 99 year old Captain Tom Moore as he completed his 100 laps of his garden, at the time raising almost £20 million for NHS Charities. He originally set out to raise £1000 by walking lengths of his patio each day, asking for sponsorship through a Just Giving page. Captain Tom attracted the attention of the nation and then the world, capturing all our hearts and smashing his target. When his donations page closed last week, he had raised the astonishing sum of just under £33 million!

During these difficult times, Tom has become a focus for people wanting to do something good and positive to help frontline workers. He has a huge following and has now attracted the attention of the world’s media. 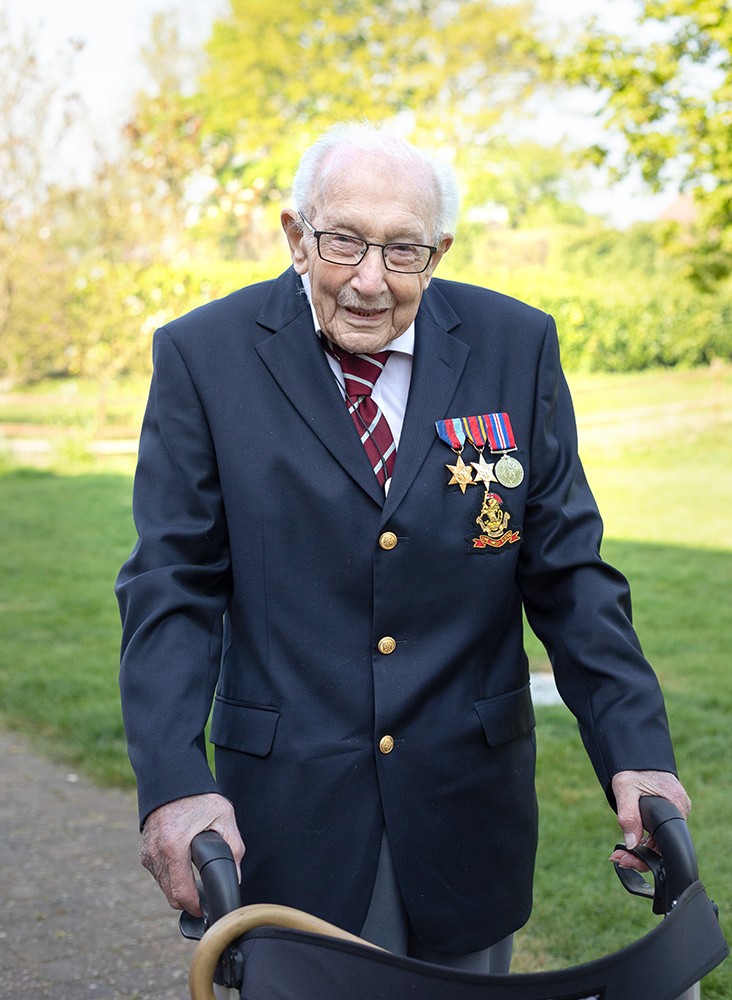 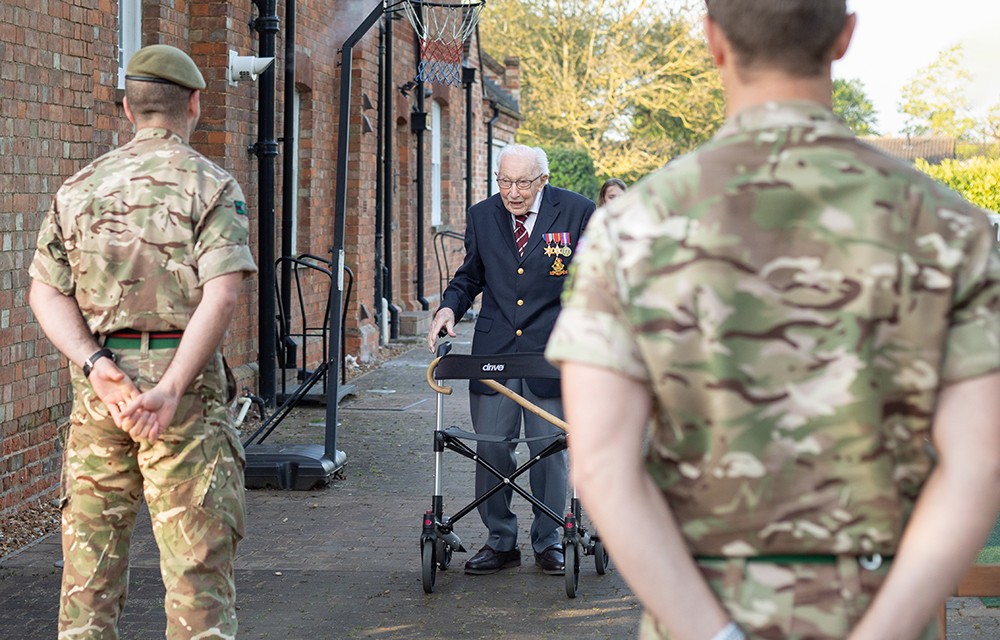 I joined Captain Tom on his journey on the day he completed his final 10 laps, live on BBC Breakfast! I arrived at his home in Marston Moretaine near Bedford, where he lives with hid daughter, Hannah, and her family, at a very early 7am. Captain Tom was already out, dressed in his best blazer and raring to go! He broke his hip less than 2 years ago and is receiving treatment for skin cancer, and he was also just 2 weeks shy of his 100th Birthday. But he had a spring in his step, a twinkle in his eye and he was just delightfully polite and charming with everyone.

The BBC had arranged a guard of honour to salute him as he completed his final lap, and I photographed the whole event.

It was an inspiring morning! I loved being a part of so much positivity, capturing photographs that showed Captain Moore completing his 100 laps and also seeing as the fundraising target rose by thousands every minute! The funny thing for me was that I knew the BBC camera man! He is friends with my parents and I used to baby sit for his children back when I was a teenager! It was an honour to be asked to go along and a brilliant experience to see the filming and to meet Captain Tom’s family, who encourage and support him in his amazing efforts. This was just the beginning of the journey. Tom and his family had many, many more ideas to raise even more money for NHS Charities. 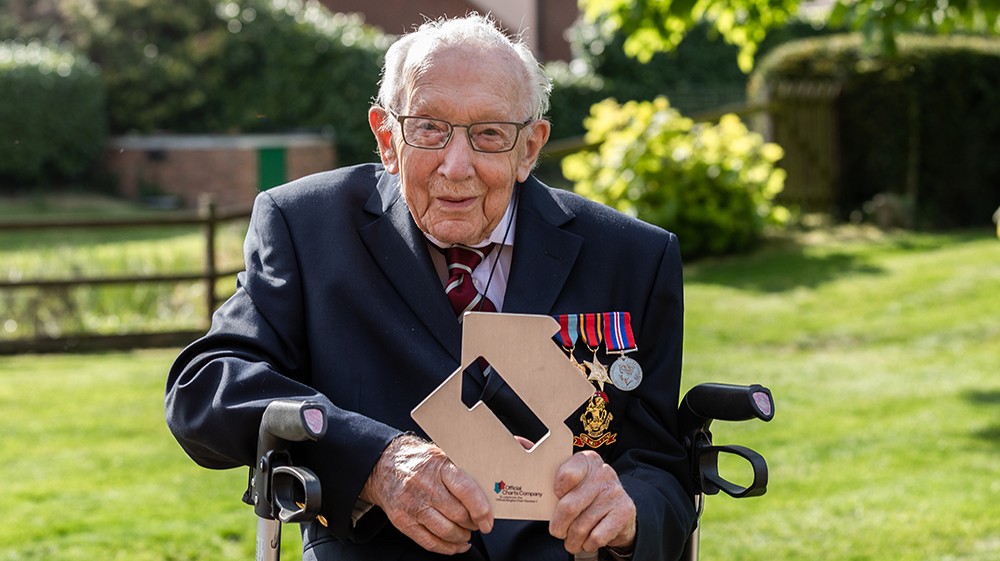 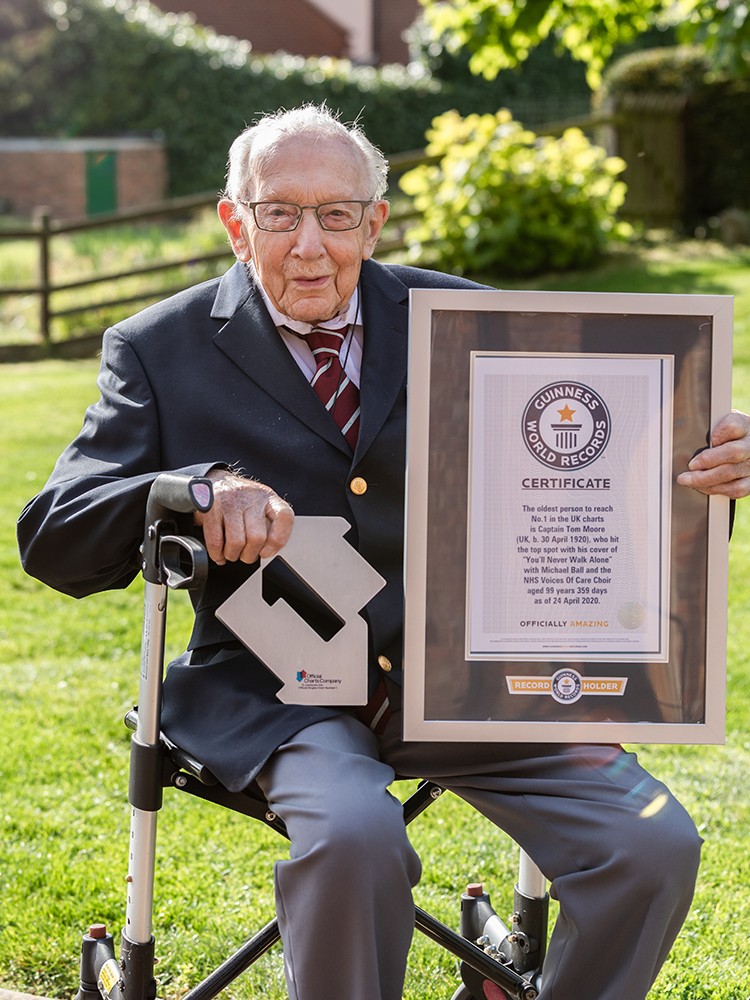 Number One in the Charts

A few days later, Captain Tom and Michael Ball released a joing charity single – a wonderfully uplifting version of You’ll Never Walk Alone. It shot to number one in the charts, earning Captain Tom not only a spot at the top of the charts, but also a Guinness World Record – he is now the oldest person to have a number one single! Add to that a second record – for the most money raised for a sponsored walk – and he’s a double record breaker! 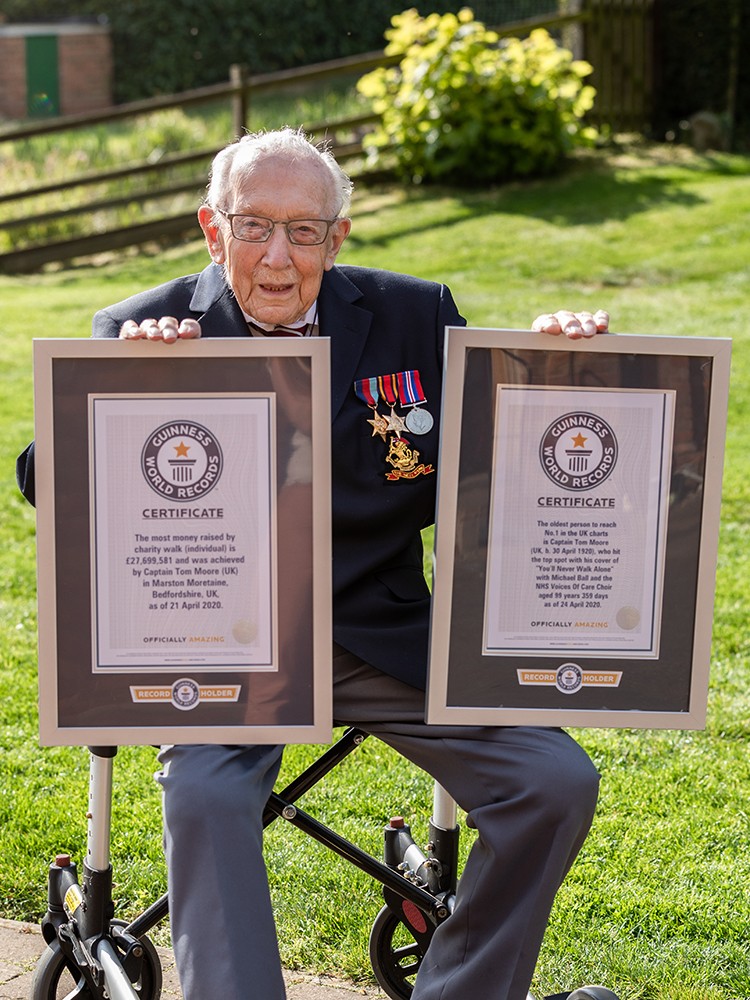 The 30th April 2020 was a rather special day. Captain Tom turned 100 years old! He deserved a memorable celebration – and he certainly got one! The Captain was made an Honorary Colonel for the military’s college for young soldiers, in recognition of his role as an inspiration for young soldiers. The newly appointed Colonel was then honoured by a flypast by the Battle of Britain Memorial Flight – a Hurricaine and a Spitfire – which was broadcast live on BBC Breakfast.

This was an emotional and awe inspiring experience! We heard the planes approaching from the distance and the rumble grew louder as they came closer – I could feel it in my chest! The planes flew in formation over Captain Tom’s garden for three separate passes and then waved a final goodbye by tipping their wings in salute. The joy on Captain Tom’s face was amazing to see, and the love of his family as they watched with him was a beautiful sight. 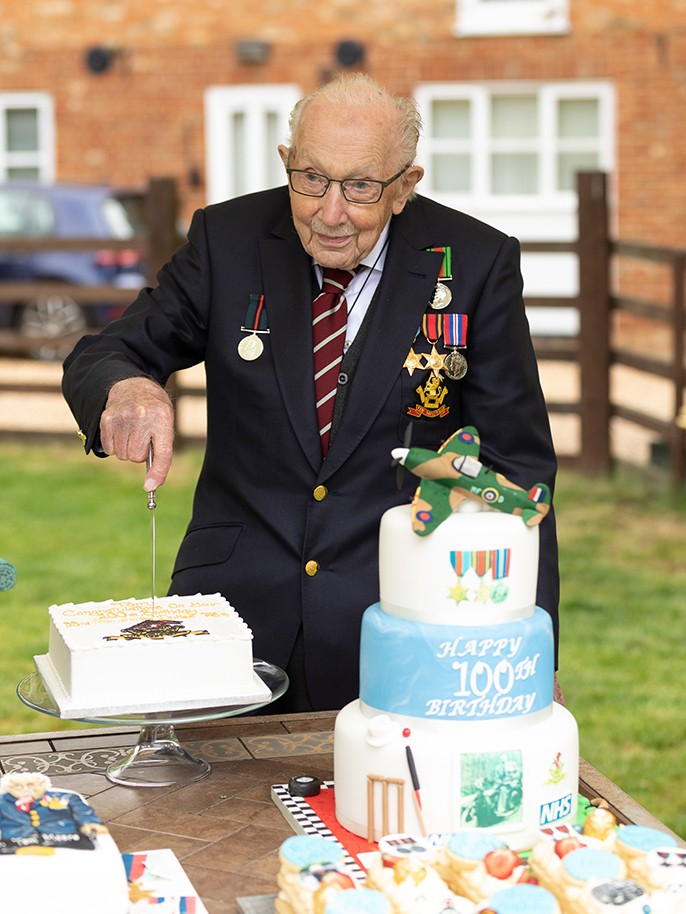 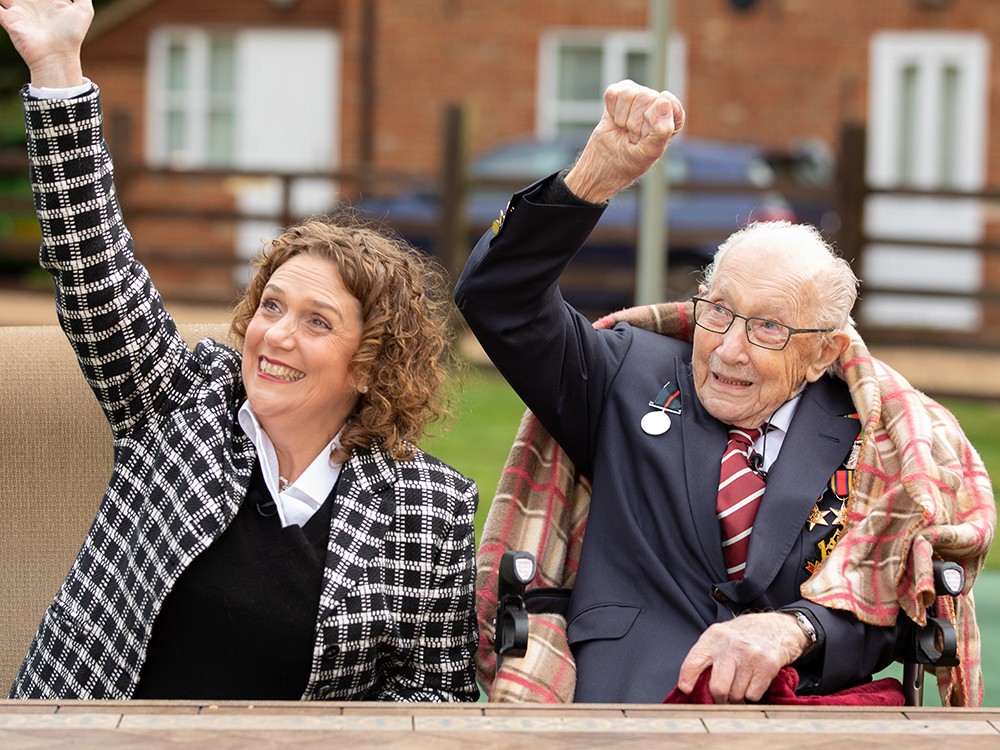 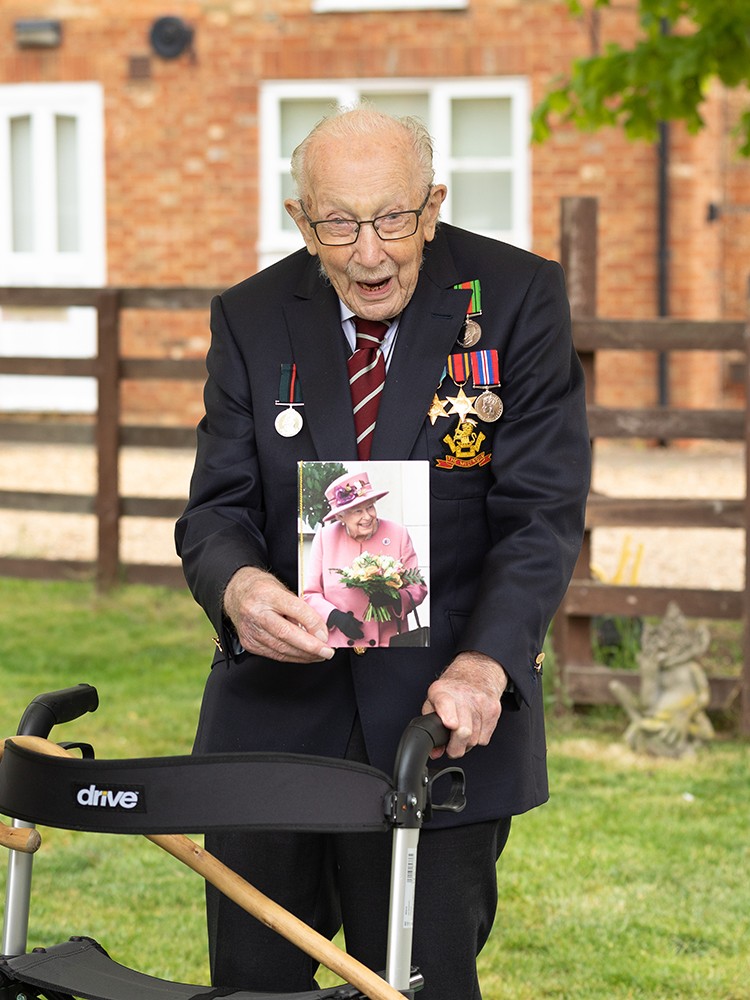 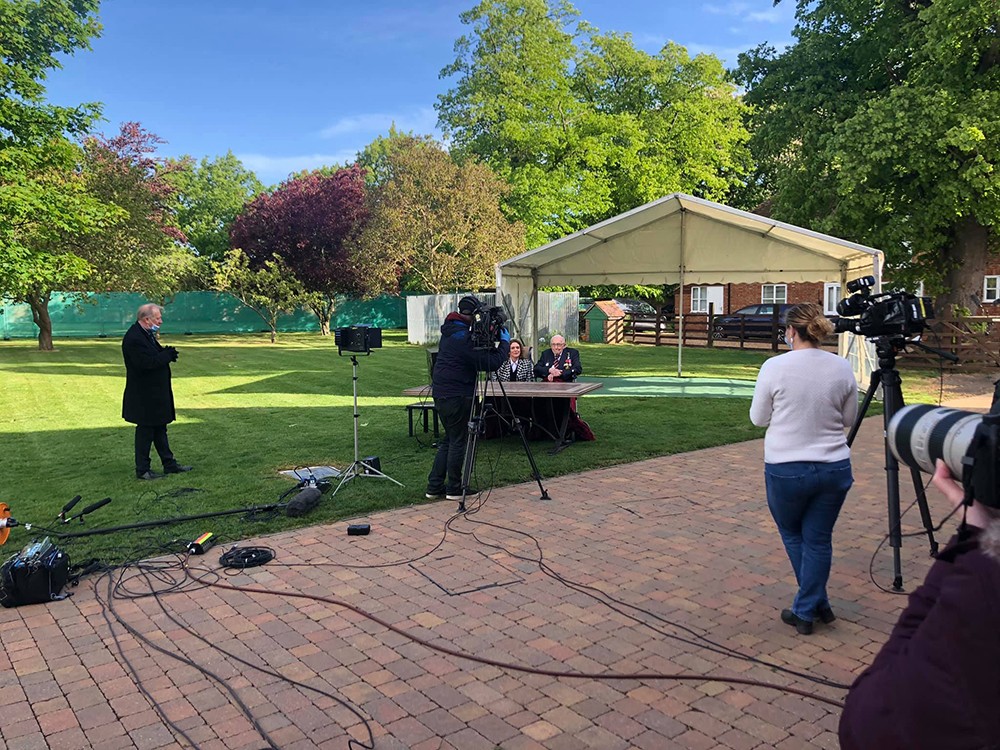 I’m just going to take a moment to share a behind the scenes photograph from the 100th Birthday celebrations. A few people have said they were concerned by the number of people around, so I wanted to reassure you that it was all very safe! Here, you see my arm and my long lens in the right of the photo, in front of me is the BBC producer, Nadia, then the BBC cameraman Kevin. Sitting at the table is Captain Tom and his daughter, Hannah. The presenter stayed much more than 2m from Captain Tom, and the crew were all spaced out and were also wearing masks and gloves. It takes surprisingly few people to run an outside broadcast! I was the only photographer, so there was no jostling for position, and the BBC were the only film crew.    (BTS image courtesy of Daisy Craydon, Daiserella Blogs)

At the end of his birthday celebrations, Captain tom was tired but very happy. He should be incredibly proud of what he has achieved so far (although I think he is much too humble to admit so!) – he and his family have provided an amazing focus to help raise money for such a worthwhile cause. He may be 100, but I get the feeling that Captain Tom isn’t retiring yet! He is keen to keep doing good and to leave a legacy that can be continued in his name for many years. He has certainly inspired me and many, may others. Keep an eye out and you may yet see a lot more from this astounding centenarian!